Many visitors traveling to the 1000-year-old capital of Hanoi feel so surprised at Long Bien Bridge – a rusty steel-made Bridge right next to the modern Chuong Duong Bridge – which seems to be a fish out of water in the hustle and bustle city. However, this unique construction has been accompanying by all ups and downs along with the development of Hanoi. Therefore, Long Bien Bridge is considered as the symbol of the courage, solidarity, and sacrifice of Hanoi’s people during the resistance wars.

Nowadays, walking on the narrow paths along the bridge of Long Bien, you could possess the rhythm of life that you may find it difficult to have elsewhere. This may be either the feeling of freedom or the beautifully peaceful sunset every afternoon. This also can be the sense of peaceful space among busy streets packed by the thousands of vehicles, or simply the memorable moments with your beloved companions. In this article, See Asia Travel would like to send you some information about this historical Long Bien Bridge. To touch your own feelings, don’t hesitate to come here. It’s worth your time.

Long Bien Bridge – What you haven’t known yet

• Interestingly, most people and medias thought Long Bien Bridge was designed by Gustave Eiffel who made the construction of the famous Eiffel Tower in Paris. In fact, his company did submit the design drawings as several other contractors, but they didn’t win the bids. Finally, the constructor named Dayde and Pille, which you can see on the small metal plaque on the head of the Bridge, won the contract to build Long Bien Bridge

• At the time being built, Long Bien Bridge was recorded as the second largest Bridge IN THE WORLD, just after the Brooklyn Bridge across the East River)

• The name of Long Bien was adapted in 1954 after Hanoi had become independent. In fact, the initial name is Doumer Bridge, following the name of General Indochina Governor.

• Driving on the left is the unique feature of this area while riders have to drive on the right in Vietnam’s traffic.

Long Bien Bridge was inaugurated in 1899, completed in 1902 after 3-year construction with the participation of 3000 local workers. After the completion, Long Bien Bridge, remarked as the first steel bridge crossing the Red River, connects Hoan Kiem to Long Bien District or Hanoi to the North of Vietnam. 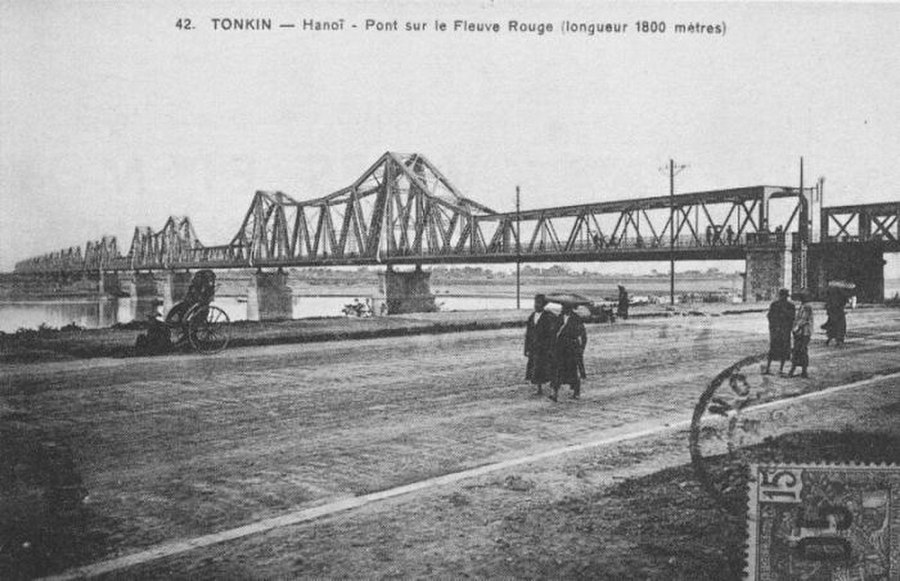 French approved to construct Long Bien Bridge with the purpose of serving for the exploration of their colonial over Vietnam which required better infrastructure. Before the bridge was built, the only way to transfer flows of goods and people across the river was by ferry which was pretty low in productivity.

About the architecture, Long Bien Bridge is 2,290 m in length, including 19 steel beams, placing on 20 pillars with 43.5 m in height from the bottom of the river. Moreover, there is a single railing running in the middle, along with 2 roads on both sides which were built for bicycles and pedestrians 20 years after the inauguration of the bridge.

In spite of playing an important role as the strategic way to transport food and weapons during the war, Long Bien Bridge was the main target for bombing of both French and American air bombers. As a result, it was broken heavily 10 times, however, Long Bien Bridge is still proudly standing today, thanks for the efforts, and sacrifices, as well as brave of Vietnamese people. To protect the bridge, Vietnamese soldiers took advantage of the bridge’s structure for artillery emplacements to fight off the aircraft attacks. In addition, soldiers also released balloons to make fog covering the bridge so that pilots couldn’t see the target.

Wars have left behind more than 45 years, and the Long Bien Bridge has no longer suffer the fierce attacks. Instead, it has witnessed the rapid changes in a developed city of Hanoi.

Today, the bridge has been one of the most fascinating attractions which both international and domestic visitors can’t miss. When visiting the bridge, you have the opportunity to admire the panorama of Hanoi center as well as the breathtaking scenery captured from the bridge with floating boats and farms along the Red River.

3. During the winter, you have a chance to taste grilled corns and sweet potatoes, just remember to ask for the price in advance

There are many couples hand-in-hand dating on the bridge at night. Hence, if you are traveling with your girlfriend or boyfriend, buy some drinks and snacks, then have a seat on the pavement on the bridge and have a memorable time together.

Don’t forget to bring all garbage off the bridge, or don’t throw anything into the river

4. If you want to capture the overview of the bridge from a higher spot, there is an ideal place called “Serein Cafe and Lounge”. From the open space on the top of the building, you can admire the best view over the bridge while enjoying a cup of coffee.

There are totally of 2 options: one way to go up the bridge and another way to go down. For pedestrians, you could choose both ways. However, if you are riding a motorcycle or a bike, be careful unless you will drive the wrong way on a one-way road.

6. Be careful when walking on the bridge because the road is just 2 m in width and the path for pedestrians is nearly 1 m. Therefore, some riders may go very close to you.

Besides Long Bien Bridge, we now have 5 other bridges across the Red River, all of which are big modern ones. However, for each Vietnamese people, Long Bien bridge has become the most lively witness of history which is called “The bridge crossing 3 centuries”. Because it was built in the 19th century; it passed the 20th century as a courageous soldier during the wars; now it has been a monument for peace.